Warm and sunny, it must be summer...

The second half of May and early June has been so much warmer than the spring so far. All the slow plant growth has been forgotten as crops race to maturity making full use of warm air and soil. May was very dry, but the quarters of an inch of rain last weekend certainly helped damp the soil again. 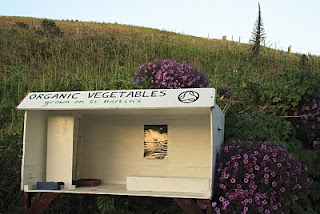 Our veg stall by the road in Middle Town was opened three weeks ago and is open every day now - it's been doing some brisk trade the past week (half term holidays). It'll be stocked up every day now until late October.

At the moment crops we're harvesting include:
The flowers around the farm look a picture at the moment, in particular red campion, honeysuckle, vetch, foxgloves and black medick.

Birds are nesting in all the hedgerows, including blackbirds, starlings, thrushes, wrens and great tits. A time of plenty and rapid growth for animals and plants. 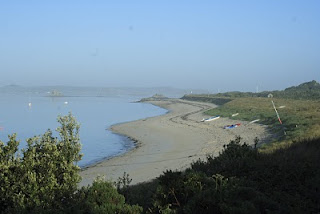 There have been some glorious mornings recently that make those early starts so much easier...
Posted by Jonathan Smith at 18:33 No comments: