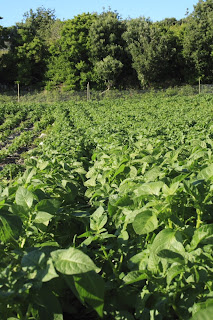 Because it's been cold this year the first potatoes have been about two or even three weeks later than planned. But at last the first earlies are ready to dig and looking good. This year, for the first time, we've grown a variety called Swift as well as the usual Maris Bard. Swift have certainly lived up to their name and are at least three weeks earlier than the Maris Bard.

They taste lovely and are yielding quite well at the moment. Last weekend we had over 3 inches of rain, followed by some more in the week. This has been interspersed with days of sun (like today), which 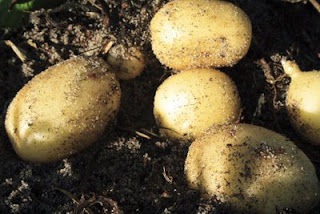 means growth rates are really good at the moment...that goes for both crops and weeds!!

It's also a pleasure to see the first carrots standing proud in rows. They're not all that far away from pulling...I reckon the first bunch of carrots could be in the third week of May. The carrots are grown under fleece from day one through to harvest. There are three reasons for this - keeps off rabbits, carrot root fly and it keeps them warmer. 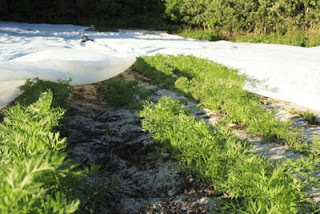 This is such a lovely time of year - everything is growing like stink, but it does mean some long days for the grower.
Posted by Jonathan Smith at 21:56