First spuds have been planted!

Yesterday was a day of rain nearly all day, but today looked promising from the start and developed in to a stunning day for January. Air temperature was around 11C, but feeling much warmer than that in the sun out of the wind - indeed it was this year's first t-shirt and shorts day! 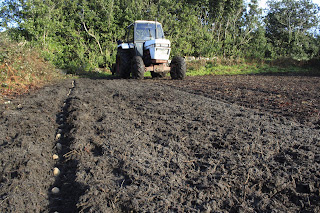 Perhaps somewhat foolhardily I decided it was time to plant some early spuds. Ordinarily I would've started planting 2 weeks ago, but with the cold spell I decided to hold back until now. If it turns frosty again I'll be OK until the leaves start showing above the surface...

The soil is wet, but the seaweed has made a tremendous difference to the feel of the soil - spongy, dark and fertile. Two sacks of Swift have gone in, covered with fleece. I would expect to ridge these up in the early March and to be digging them in early May. Fingers crossed... 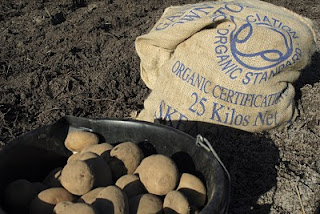 Posted by Jonathan Smith at 18:30 No comments:

Won't be long before planting now

January comes round again and the seaweed is rotting on down nicely with all the winter rain. I actually did some rotavating in preparation for early potatoes yesterday. The first planting will probably be end of January, with the aim of lifting in early May; second planting in late Feb to lift mid May onwards and the rest in March which will be second earlies and maincrop from June through to September. 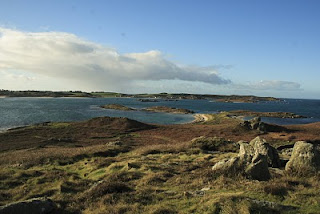 After the quieter months of November and December suddenly the farming year starts to pick up pace again, leading up to the very busy period from April to June when all the sowing, planting and weeding takes place - with a fair amount of picking thrown in too.

The weather has been quite cold recently, we even had some snow and ice. But in comparison with everywhere else it's been mild really. The question is, will it stay mild enough to plant early spuds, or will it go cold again? If only we could know an accurate 3 month weather forecast!
Posted by Jonathan Smith at 13:24 No comments: